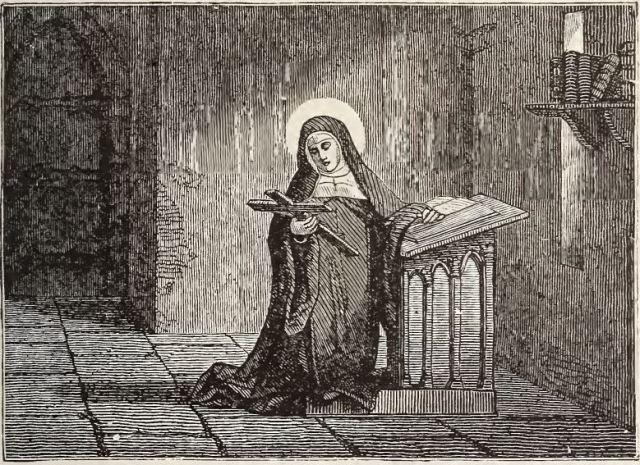 When a child of seven years, Teresa ran away from her home at Avila in Spain, in the hope of being martyred by the Moors. Being brought back and asked the reason of her flight, she replied, “I want to see God, and I must die before I can see Him.” She then began with her brother to build a hermitage in the garden, and was often heard repeating “Forever, forever.” Some years later she became a Carmelite nun.

Frivolous conversations checked her progress towards perfection, but at last, in her thirty-first year, she gave herself wholly to God. A vision showed her the very place in hell to which her own light faults would have led her; and she lived ever after in the deepest distrust of self. She was called to reform her Order, favored with distinct commands from Our Lord, and her heart was pierced with divine love; but she dreaded nothing so much as delusion, and to the last acted only under obedience to her confessors, which both made her strong and kept her safe. She died on October 4th, 1582.

“After all I die a child of the Church.” These were the Saint’s last words.

Illustration and text from Pictorial Lives of the Saints With Reflections for Every Day in the Year (New York: Benziger Bros., 1922).

Life, Liturgy and the Pursuit of Holiness

Offering reflections on Mass readings and other subjects pertaining to the Catholic faith.

The words of saints and sages.

Invisible Monastery of charity and fraternity

my homilies and other musings

What's Happening At The Network!

"Go therefore and make disciples of all nations." Matthew 28:19

Devotion to the Holy Face of Jesus - to make Him known and loved.

Mother Of The Fiat

A PLACE WHERE GRACE HAPPENS

Meditations on faith and art

I Want to See God

And as I await the vision of His Glory, I delight in the glimpses of Him which are all around me...can you see Him too?

True Devotion to Mary, the Mother of God

A Blog for Catholics who Refuse to Compromise

The Catholic Faith Shines with the Light of Christ

"You equate your understanding of your particular sectarian form of Catholic Christianity and its institutional expression with God's own truth primarily to justify your petty armchair popery...." Yep, that's what it's all about.

Reflections of a Secular Franciscan

Reflections about Our Lord, St Francis and Life.

They are happy who live by the law of God.

To Love and Truth

Journeying The Way to the Age to Come

Living in the world. Longing for the desert.

This blog is about what we can learn from church history.

Scripture and Catholic truth and wisdom from the early Church Fathers, Saints and Christian Writers.

Drawing From the Well

"...whoever drinks the water I give them will never thirst..."

Quoting the Bible, Prayers, Saints, and Other Notable Catholics

Oh, for the love of chant!

Random musings of a Catholic musician and liturgist

Inspiring, Encouraging, Healthy / Why waste the best stories of the World, pour a cup of your favorite beverage and let your worries drift away…

I would rather die looking for a miracle than live not believing in them.

8 Kids And A Business

Balancing a large family with a small business, all by God's mercy, grace and providence